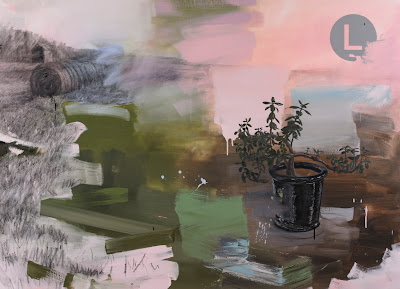 When you are in front of a Damian Stamer painting, you enter more than a few visual experiences at once: you are in a fast-moving vehicle; you are on an ocean, you are in a house, or in the sky. You are among landscapes that you recognize, but only vaguely. Memories are transitory and hold only for an instant before becoming something distant. You see twins and you see doubles. Solid ground slides into transparent air, and surfaces are mercurial phantasms: you are never quite able to stand on them, yet they always compel you to test or trust them. The line and the curve cohabit here, if tenuously. Circle leads to square; rectangle to triangle. Framing devices capture our sense of graphic ground and completely pull us in another direction from where we wanted to concentrate our looking. These paintings are worlds of fractal, ever-changing visual energy. And we are completely at ease in the act of contemplation as we wend our way through their beautiful surface tensions and surface possibilities. 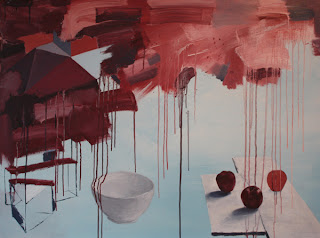 When I first entered the group show at Brenda Taylor Gallery ("In The Galleries" at right) in Chelsea this past spring, and faced Stamer's extraordinary painting, "Szolnok" (below, left), I actually averted my eyes -- because I didn't want to take it in just yet. I could tell in an instant that this was a painting I wanted to luxuriate in by the act of looking. I went to all the other paintings first, and then went back to it at the very last. I was mesmerized. The world of the image is a dreamscape; half abstraction and half reality. Small points of reference -- the perfect green apple, the windows and doors of the house, an area in the back -- a photographic memory shadow -- my eyes were filled to the brim. The color is a wall of almost antique mauves and taupe, with jeweled lights of pink, green, and deep indian red. The application of the paint was sensual and dynamic; determined and also questioning. I could see Stamer thinking the painting into being, mind to brush. It was the work of someone who loved to paint; not just pictures, but ideas, of visual construction and juxtapositions of meaning. The work was informed by a very personal, almost diaristic quality. And what we are captivated most about diaries are their aspects of privacy and secrets.
Yet this was a completely open image -- it engages the viewer, draws them to lookand welcomes their perusal. The "hieroglyphics" here were as captivating to decode as the painting itself is a maze in which to exercise one's visual detective work. Having the chance to see the work in the context of the painter's other canvases, I could see that Stamer's worlds articulate a simple belief that a painting should always let the viewer enjoy a good time -- as well as have something interesting to contemplate. In speaking with the artist, I was engaged by his simple honesty and quiet intelligence when he spoke of his work -- and the real joy he takes in painting -- and in talking about painting. 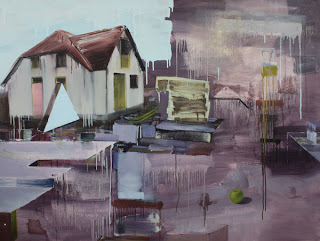 When I had the chance later to see more of his work, I was struck by the same elements of beauty and mystery -- and story -- that had engaged me so immediately as "Skolnok". In images such as "Loch Lyon" (above, bottom), one is completely pulled into the frame of the painting's mist-shrouded ocean; one wants to walk on it. Or, as in "Alma" (top, left), I was tantalized as much by its waterfalls of almost melancholy color as I was by its wandering planes of geometry. 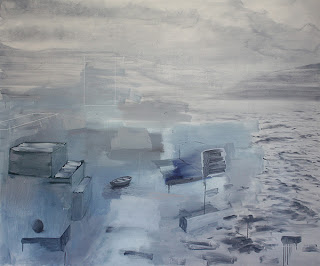 A single apple, boat, or glass takes on more than simple meaning in your paintings. They become signatures in a way. How do you choose these objects and why do they have such particular attraction for you?
I choose the objects for what they will add to the painting, often a contrast and pop. For example, a yellow-green apple creates a dynamic complementary relationship with the violet background. The fact that it is realistically painted further heightens this contrast with the abstraction behind. I would agree that these objects take on additional meaning. When painting a very detailed still life, or even something from a photographic source, I create a relationship with the object. After spending a long time studying every shadow, highlight, curve, and edge, I feel like I have gotten to know this inanimate object in a more personal way. Perhaps this deeper personal connection is why they can be viewed somewhat like signatures.
How did your study in Europe change and develop your visual ideas? What is different about the experience of studying in Europe that helped you most in going forward with your work as an artist?
With the support of a Rotary Foundation grant, I was given the opportunity to study for a year at the Stuttgart State Academy of Fine Art and Design under the tutelage of Professor Holger Bunk. This experience proved to be one of the best years of artistic growth of my life. It is a common cliché that one learns from his or her peers just as much as from a professor. This was definitely the case in Stuttgart. I shared a studio space with artists who were talented, driven, and open to the discussion and exchange of ideas. In the academic tradition of former West Germany, students are given studio space and time to develop with almost no assignment-based work. Therefore, students have the tools to nurture their artistic style and voice.
A possible downside of this educational model is that students are not required to master technical skills. So I was fortunate to have honed my technical skills in the United States, and was given the freedom to take this skill set to a higher conceptual level. The paintings I made that year are the foundation of my work up to this point. I still have a very close relationship with the classmates I met that year, most of whom are now working artists in Berlin. We formed a group called “The Wolf-Gang”, after the name of one of the founding members, Wolfgang Flad. This support group has been instrumental in giving advice to navigate the art world, and I hope to one day create a group exhibition that documents our combined artistic growth as friends and colleagues. 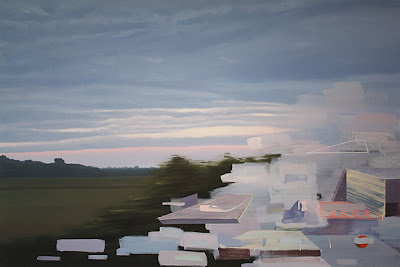 DID YOU SEE ART TODAY?

Do you ever notice the art around you? Did you ever look and see something so completely beautiful, or strange, or weird, or just plain arresting? New York is filled with art -- in the run, in small spaces we often miss, or wide open in front of us. The City is the greatest canvas for the marriage of art and place.

KEN MAJERUS sees the art that is all around us, when we take care to look. For a collection of these surprises of art-in-place through his eyes, visit his website I SAW ART TODAY. And then go out and look around you! Where will you see art today?