WHAT'S PAST, IS PASTE: LOVE IS A CUT UP 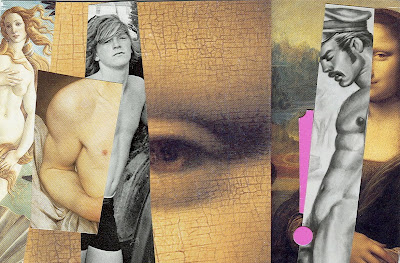 I have loved the medium of collage since first seeing the work of one of its finest proponents, Kurt Schwitters, in the early 70s; it was during a time when I was still pursuing the idea that I might be a practicing, rather than a visiting, artist. I was still trying to reconcile my admittedly mediocre technical ability with the impatience to get my visual ideas down quickly. Also, collage's immediate magic of making one visual idea mean something completely different when placed next to another like or unlike image, has always compelled me -- because I have always loved juxtapositions. The linear world has never attracted me. I move from one thing to another, and always have. Granted, the negative side of this is -- that I move from one thing to another. The positive aspect of this is that I always am comparing, measuring, stopping to see relationships from a different perspective. But it wasn't until the late 90s that collage became a medium that I sought out, almost unconsciously, to assist me in going forward in my life at a time when I was going through the process of a breakup. At the time, all I needed was grounding, stability, and yes, the linear.

What I was experiencing was the world in fragments. I needed something to express what, to me at the time, was inexpressible: the dissolution of a loving relationship of almost 14 years. I had many evenings of silent, interior mulling. Communication was at a standstill; the oncoming emotional storm had to end somewhere, and I felt as if I just had to walk off the edge of something known into something unknown. I'm not even sure when I started cutting up the first magazine page. Almost somnambulantly one afternoon, my scissors cut through pages and page of whatever was available: mostly old issues of Abercrombie and Fitch catalogues, back issues of Freshmen, and other gay magazines. Pieces of bodies.

Without thinking, but certainly within an intense spell of conscious "flow", I began placing cut image over, under, next to cut image. The floor was a mass of guillotinings. I didn't stop for hours at a time. I had nothing more than an old drawing pad, a child's glue stick, and a deep need to.....wrest feelings out of my silence. The man I was leaving looked upon my cuttings and pastings as something bizarre, so preoccupied did I seem to be with it. He didn't comment on them. He couldn't figure out what the hell was going on.

Three days later, I had almost 25 collages, each the same 8x10 size of the available pad of white drawing paper that was available to me. Each of them an assemblage of faces and bodies in an array of combinations and configurations. Yet, something was completely grounded in each of them. Each one held some proportion of color relationship, design purpose, physical acumen, and compositional foundation. Some were just fragments of lips -- lost kisses? Dislocated phalluses, landscapes of buttock and calve, art anatomy that I always wished I could draw! The half-hearted and whole-hearted attempts at trying to place my physical world into some semblance of order. When I spread all of them out before me, what I realized was two things: I still had a damn good ability to create something beautiful in art; and that I would get through all that was going to happen. I had translated my silences into something verbal, visually.
Long story short; the relationship ended. It hurt us both; we both went forward. He's still an incredibly important and loved person in my life and we are good friends. The collages stopped. That series of output had its single, particular reason for being and it was finite. I had to piece something together to feel as if something was not coming apart. And, on a deeper instinct -- I just wanted some art in my life again. I missed it. One by one, I gave many of the collages away: gifts to friends over a period of a couple of years. They still exist as those gifts, and that is wonderful to me. Only one of my friends, an artist, knew of the emotional background in which they were created. I gave him the very first one that I did (at top, above, called "Muscle Boy"). Another one, which I called, "The Kiss", is owned by someone who was a godsend during the time of my metamorphosis -- and has come to be an extraordinary friend throughout the past six years. So, this small output of my confusion has found places -- and new meaning -- in the the homes of friends. I can never think back at that time with anger or sadness when I see these in the homes of my friends. 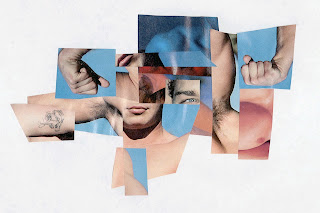 My loves have remained in my life, though the meanings have changed: when you place one object next to another object, they have a completely unique and new dialogue. Add another on top; something beside it. Add one color and another color has new spirit. But that's how we connect, isn't it? One things means nothing without another meaning to refresh it; to reinvent it; reinforce or damn it. Of course, my love of collage deepened, although I did not participate in the making of them again. I found Ray Johnson -- the great and vibrant man who made meaning and idea become heart and mind for me -- with the added ingredient of immense and intelligent humor. I found Joseph Cornell again, with new eyes; I sought out collage in all forms. Jess! the wonderful Jess! Leo Manso; Janet Malcolm -- yes, of all people! -- Robert Rauschenberg; Hannah Hoch; Robert Motherwell. Picasso. I had known their work. But now I was able to see their work. I understood how they could take apart the world of meanings, and put it back together again. To make something mean something...else.

DID YOU SEE ART TODAY?

Do you ever notice the art around you? Did you ever look and see something so completely beautiful, or strange, or weird, or just plain arresting? New York is filled with art -- in the run, in small spaces we often miss, or wide open in front of us. The City is the greatest canvas for the marriage of art and place.

KEN MAJERUS sees the art that is all around us, when we take care to look. For a collection of these surprises of art-in-place through his eyes, visit his website I SAW ART TODAY. And then go out and look around you! Where will you see art today?